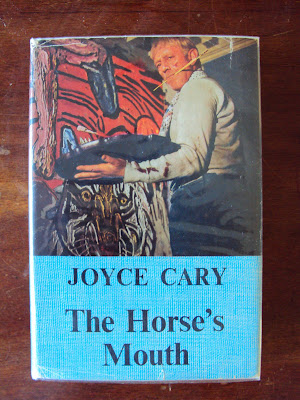 This is one of my favourite books about an artist, the Horse's mouth ,written by Joyce Carey in 1944. It is about Gulley Jimson, an old, skint ,randy artist in post war London living in house boats and run down studios along the Thames. He's in the stage of an artist's life between early success and the late recognition that an artist too often gets after they die, but he always tries to make the most of a bad situation, including stealing paint from shops and sponging off his friends and a couple of millionaire collectors. Its a gritty, funny, but also quite sad story with some beautiful descriptions about how an obsessive artist's mind works.
It was made into a film too which has some good bits with Alec Guiness great as Gulley, but it has a bit of 50s slapstick which I guess was to bring it to the mass audience. As usual the book is better.

Posted by alasdair lindsay at 01:27